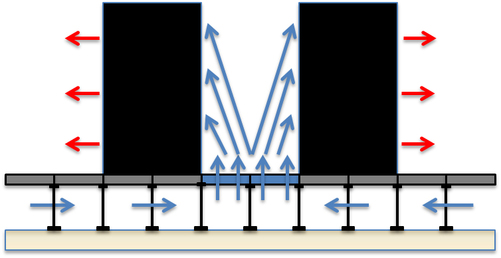 Historically, data centers operating with a raised access floor system have utilized traditional airflow panels coupled with aisle containment for their server rack cooling needs. These airflow panels would supply air in a vertical plume, which has been shown to result in a bypass airflow rate –  air that is delivered into the data center but not consumed by the equipment and exhausted as waste heat – of 50% or more. It was this limitation which necessitated the development of physical containment systems as a solution to reduce bypass airflow and maximize the amount of airflow which could be captured and used to cool equipment is maximized.

But physical containment can bring its own set of challenges as it requires a roof to be installed to be effective, which limits the flexibility of the build, increases overall cost, and impacts fire suppression, lighting, and other data centre service distribution concerns.

Virtual containment is an increasingly popular solution to this challenge, which focuses on solutions that deliver the right amount of air directly to the equipment, maximizes design flexibility and allows data centers to operate more efficiently.

Unlike physical containment systems, virtual containment utilizes directional airflow panels which angle airflow toward the face of the rack, nearly eliminating bypass air while increasing cooling capacity and energy efficiency. These panels can achieve a 93% Capture Index – the amount of air delivered through the panel that directly enters the face of the server rack in front of that panel – significantly reducing the amount of bypass air.

Using a directional panel can save more than 40 percent in fan energy by enabling a rack with equal load to be effectively cooled, using approximately half the CFM of a conventional panel. With less air required and higher Delta Ts, fewer computer room air-handling (CRAH) units may be needed in a new data center, reducing initial capital expenditures by up to 40 percent. In retrofit applications, CRAH units with fixed-speed fans can be set to standby mode, or variable-fan drives can be adjusted to operate at a lower static pressure, saving energy.

The future of data centers will inevitably continue to evolve as cooling and service distribution needs in the data center sector change. Raised floors have been used throughout the history of data centers because of their ability to enable facilities to address often unforeseeable advancements in technology, and the virtual containment solution continues that trend.

When virtual containment is utilized and directional airflow panels are partnered with control devices and doors at the end of the aisle, bypass air can be nearly entirely eliminated, and the system provides containment without the need for a roof or other overhead partitions.